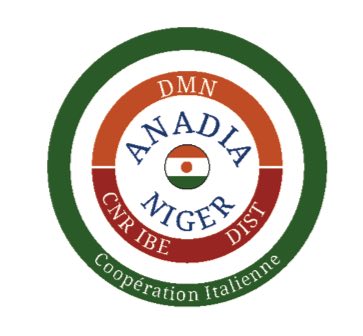 The ADAPTATION TO CLIMATE CHANGE, DISASTER PREVENTION AND AGRICULTURAL DEVELOPMENT FOR FOOD SAFETY (ANADIA) project was born from the long collaboration between IBE and the National Directorate of Meteorology (DMN) of Niger. The project was launched in 2012 thanks to a co-financing from the Italian Agency for Development Cooperation and is now in its second phase (ANADIA 2.0). IBE-CNR coordinates a partnership made up of DMN, the Interuniversity Department of Sciences, Project and Territorial Policies of the Polytechnic and the University of Turin and various local partners including the Directorate General for Water Resources, Directorate of Agricultural Statistics, Coordination Cell of the Early Warning System and National Council for the Environment and Sustainable Development. ANADIA is a Research and Training for Development project that aims at a better understanding of climate risks and their impacts on the rural world in Niger. The project has contributed to the development of Climate Services for small rural producers which are currently widespread and operationally used in eight municipalities of the country, thanks to a close collaboration between populations, local actors and media.
The flagship of ANADIA 2.0, however, SLAPIS, il Sistema di Allerta contro le Inondazioni della Sirba. The philosophy of SLAPIS is to demonstrate that it is possible for local institutions and communities to implement a simple alert system based on existing skills and tools that proactively use hydrological and hydraulic measures and forecasts to reduce flood risk. SLAPIS covers the Nigerian stretch of the Sirba River through the mapping of alluvial areas, hydrometric measurement stations and integrated hydrological models, adaptation plans for the villages involved and an information platform of the hydrological situation in real time at the web address: www.slapis-niger.org.

SLAPIS has been operational since 2019 and in 2020 was extensively tested during an exceptionally abundant hydro-climatic season on both the Sirba and the Niger River in Niamey, the capital of Niger.